Advertising and marketing on mobile devices was always something put in category of ‘what will come’ — year by year. Problems facing the process of technology and software standardization, problems when talking about the cost of Internet access service, the problem of a large number of technically obsolete mobile devices over a year old and with low technical capabilities…these are all reasons — or some of them — why the topic of mobile Internet is discussed with caution…

But, how are the things right now? I’ll try to sum up in a few lines the revision on the current situation —without my foresight — and make your own conclusions.

One android for everyone

One step ahead are making operative systems that can be found on new mobile devices, as well as attempts to unite some manufacturers under single operative system like for example, Android. I might as well say, on Google conference held in May this year, Android enjoyed a live presentation, which can be watched in the next video (the introduction of Android is arround the 21. minute):

Some of you may notice the resemblance to the iPhone, but what I find interesting is the fact that they are trying to unite manufactureres under single system and thereby, make the life for all develepers simple (it is common knowledge that each mobile phone model comes with its own system and its own version that, altogether, requires specially made aplications).

It is a fact that advertising on mobile devices is completily different from what we are used to see on our monitors (starting from operative systems, browsers and up to use of Internet).

mini opera and ‘The One’ 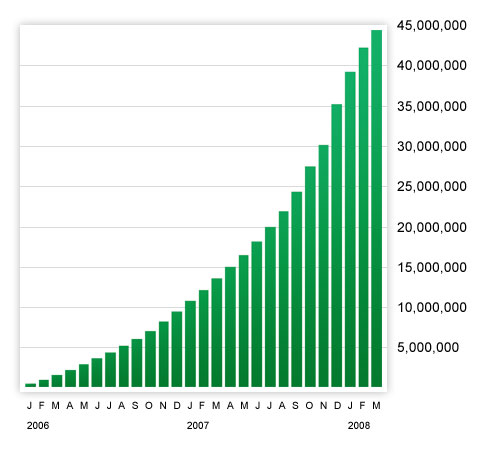 The number of Opera users (for mobile devices)

Also, wherever you go, Google finds something, meaning — there is money behind that, there is interest, there are users and everything else. Following that footprint, Android started its venture. Now, I’ll give you the announcement of Eric Schmidt saying that the main focus is exactly the mobile market:

“The most obvious large space of advertising is the mobile internet. Every German has a mobile phone. Just take the success of the iPhone: It has the first really powerful web browser on a mobile device – and many more are still coming. Nokia has one coming, Blackberry has one and Motorola has one. They are all supposed to be released this year. By these products, the advertising gets more targeted because phones are personal. So targeted ads are possible. And that means the value of the ads will grow. The next big wave in advertising is the mobile internet.

UPDATE: In his comments, Luka left interesting data and his vision on this topic as iPhone user, and also an ex-user of mini Opera and IE:

5 millions sold iPhones, the IDC research states that even 78% of iPhone users use mobile Internet on a daily basis, apropos, browser by comparison to Opera and IE as much as even three times…ergo Safari has changed the way in which people use their mobile phones.

It won’t do any harm to mention the role of search engines in the whole thing, maybe some of you are already familiar with the ‘phenomena’ called navigational searches that comes to its full extent when dealing with small screen devices. What is this about? The user, instead of the address bar, uses search engine in order to enter the domain name he wants to visit. For example, the user first goes to Google, than enters ‘techcrunch.com’ into search engine and clicks (usually) the first search result.

It is an interesting thing that this technique is used by traditional (TV) advertising, to be more specific, in this way — Kelloggs introduced its campaign commercial for the Special K product, where you can see on a small screen a commercial that instructs viewers to visit Yahoo and search the keyword ‘Special K’. There we have that connection to SEO and search marketing!

And isn’t that exactly what would be preferred when talking about mobile devices? Try to enter a web address of some complicated URL on your mobile phone. Or is it more simple to go to Google and enter the keyword that will lead you directly to the promo page?