Long time no conference, sadly. These past two years have been a lot sadder and I’ve felt isolated at times because of online communication. Some conferences were giving it a go and doing some online talks. Even though Shift was available for an online audience as well, I doubt that they had the same feeling of being in a packed sports hall and feeling safe!

Finally, a live conference which I can travel to and attend! I have been to Shift conferences before, but it keeps giving more every time. This time there were three stages and an outdoor area. An array of topics kept us interested throughout both days regardless of having different interests or favourite programming languages. We were a party of six, and almost everyone had kind of a sweet problem – we couldn’t be in two places at once!

You might ask yourself: “But how did she feel safe with a deadly virus around?”

The organisers were thinking about us and made sure we can enjoy the conference to the fullest while still being safe. Everyone either tested negative or was vaccinated, which allowed us to be indoors and enjoy seeing everyone’s faces without masks. This elevated the experience – nothing hits the spot like networking in person. 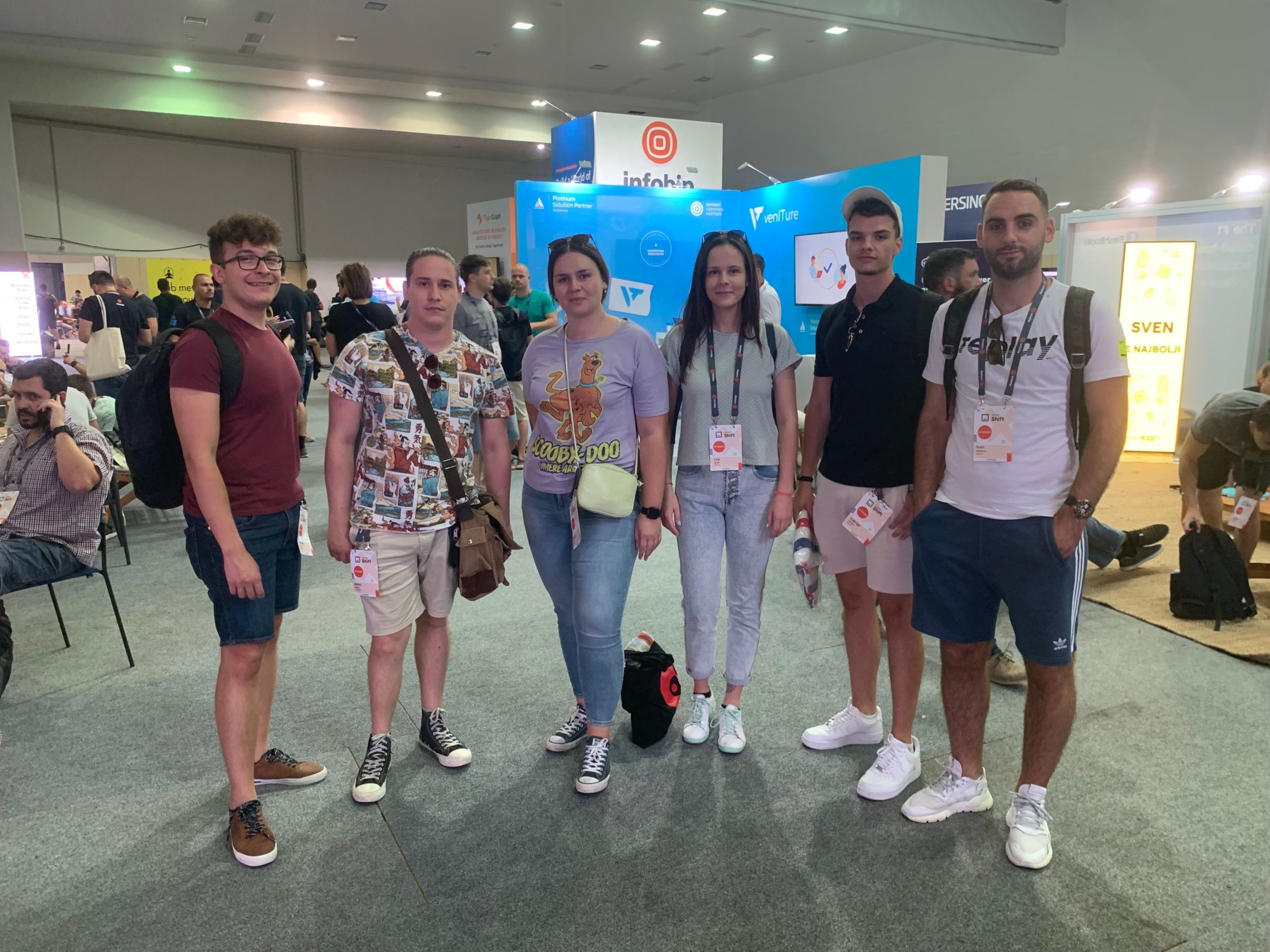 Talks that inspired us

Even though there were a lot of JS focused, what my colleagues would say, front-end talks; there was an interesting workshop that sparked the interest of two of my colleagues.

“I attended the “Fast End-to-End Testing Using Cypress.io” workshop held by an amazing speaker who used to work for the Cypress team, Gleb Bahmutov. We were unable to connect to WiFi for an hour, so he had to improvise, but it actually turned out pretty well in the end. I wanted to learn more about new ways of automating the testing process since I am a QA engineer. I work in another framework, but it was great to hear something new and think about using it in the future. What I liked the most about Cypress is the easier way of generating test results, the possibility of video recording and the more accurate way of network capturing. I only wish Gleb mentioned more disadvantages I read about later. He also made me think deeper about some concepts of testing, e.g. why randomizing test inputs is bad. I’ll think about it more since I believe it is sometimes necessary for bigger projects. In the end, I’ll either send him a message on Twitter or refactor the project I’m working on! 😛 “- says Lea.

Matej has a different angle on the same workshop:

“As a front-end person, I wanted to learn something about testing and how the tests should be written. I liked that Gleb actually worked with this tool and later on, became a developer – so he knows what he’s talking about. The downside was that the differences between browsers and engines were ignored which implies Cypress isn’t reliable for some edge cases. You know about Internet Explorer, right?“

I enjoyed quite a lot of talks since a lot of speakers managed to present a new concept that seeds the mind to think more deeply about our own work habits and the way we think about problems. Problems in this context are real-world problems solved by the solutions we are coding, as well as the problems we encounter while coming up with those solutions and how they are approached.

I left the conference with the impression that there were a lot of soft skills focused topics, more than there usually is at any IT conference. Not that it bothered me, on the contrary, I like to think I’m ready to take a big step in “managing others” direction and some of the speakers nudged me to start thinking like a visionary. Speakers like Kent C. Dodds with “Don’t Solve Problems, Eliminate Them”, Kitze with “But… You’re Not Facebook” and Nader Dabit with “Building Full Stack dApps with React, Ethers.js, Solidity, and Hardhat” had me thinking about how a potential problem can be used as an opportunity – a classic “it’s not a bug, but a feature” on steroids. 😀

Donny Wals helped me realize writing tests cover all cases you do by hand while developing. Developer testing is more correct and will take less time eventually. This realization will be the starting point to convince my team lead to write down all possible test cases since I feel I’m missing testing experience. We should stop assuming testing is a waste of time. But… the existing codebase should be refactored to fit automatic testing. Hope my team won’t hate me for insisting on this! 🤞

Even though I gave a lot of compliments to the Infobip Shift, there is something we all would love to see next time. There were three stages but it seemed like they weren’t always focused on a similar audience. I’m not mad at the layout of the whole conference, where you have to walk through the networking areas to get from one stage to another. I’d still hang out there even if most of the talks I’m interested in are on the same stage. 😀

This may seem unimportant but in a few cases someone interested in JS had to miss a talk she was interested in because there was also an interesting JS talk on another stage. And the food – seems like a recurring problem on Shift. Please feed us something great next time!

I’m going on about the networking areas, but was the networking good? There are different experiences in networking at conferences depending on with whom you are there. When there’s only you or just one other colleague, you find yourself in more conversations with new people. This time the experience was a bit different since there were a lot of us initially. I feel like I haven’t talked as much to new people as I wanted to, but even people from other companies I’ve already met somewhere – it is in the same region where I live and work so it’s not that surprising. And this wasn’t my first Shift! On the other hand, Ivan has never been to a Shift conference:

“This was my first Shift, and I was amazed how diverse the topics were – even us QAs felt welcome. I was a bit hungry…”

Nikola wanted more, and more – and then some more, like a true social butterfly he is:

“I enjoyed my time at the Infobip Shift conference this year, but I wish there was more stuff to do. After the first day of exploring I have already seen everything and been to every booth!

The food was nothing special, but the main problem was that there were so many people and so few places to sit and eat, this is a huge oversight in my opinion. The conference was overall lacking in places to just sit & chill for a bit. ”

More than a few talks inspired all of us to question our habits as software developers.

“Even if some topics seemed more interesting in the announcement, and some speakers could have done a better job at getting their point across (and keeping an eye on the clock) – I enjoyed some of them.

I liked the New Adventures in Front-End, 2021 Edition talk from Vitaly Friedman the most. The talk had a nice flow and was very interesting. It made me aware of how many users are still buying old & slow phones which are hampering the progress of web tech evolution. It also made me aware of how many different types of ads exist nowadays and how much of our info is being collected on the web.

I also liked the talks regarding ES Modules since that is something me and my team will have to tackle shortly and the way the stages were organised, but I wish there was better isolation between them. Also, I got to meet some of my colleagues from Kiwi.com in person, finally!

All in all, Infobip Shift was enjoyable & enlightening, it would be a shame to not use its huge potential to become something even bigger, with more companies involved!” says Nikola.

He was talking about the users slowing the web tech down with their “old” phones and that was something I didn’t agree with him. @TheKitze (Twitter) gave a talk in which he pointed out that we developers feel a kind of pressure from the community to fill out our applications full of all the latest hit stuff in web tech. One of my favourite sentences he said is:

“Somebody put them out as an achievement and we think we need to do the optimization.“ @TheKitze

Them being everything you can imagine, from having VIM and consoles in every web app to a fancy UX design for data analysis services.

Gabrijel was now on the other side of the coin – he used to be a part of the organization team for this specific conference more than once:

“After several years of organizing the conference, I had the opportunity to come as a guest and finally enjoy a stress-free conference. The speakers were great and there was something for everyone, including crypto and cars. Kudos to the team for organising the biggest Shift so far, looking forward to the next one!”

There were lots of different people at this conference, as you can imagine just reading about the various experiences of the six of us.

Finally, I’ve figured out I have grown as a software engineer (even if I didn’t officially study to be one) because I’m not mad the talks didn’t teach me anything practical. I got so many new ideas while listening to speakers who mostly managed to spark my interest in some new concept. I understand now this is the key takeaway from any conference – besides the networking, of course. 😀

Return of the “not your typical festival”: DK2022 Conference

A look beyond technologies – the mediators for learning important concepts